Cold Shott and the Hurricane Horns have been performing and recording in the Valley of the Sun Since 1992, and throughout that course, they have managed to release a couple of albums for their fans enjoyment. All albums are available online through the outlets listed below. 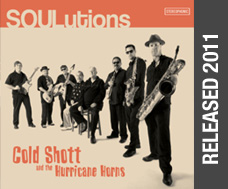 “Cold Shott has a very tight sound with an upbeat groovin’ feel made up of first-rate musician’s all around. The recording projects a lot of energy, one of the most important features of recorded live performances. This is good stuff to enjoy as ‘traffic jammin’ music’ to/from work!”  — Herm from ElectricBlues.com 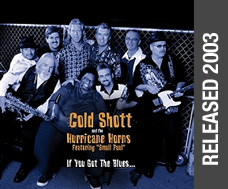 “Recorded live at ‘The Rhythm Room’ club in Phoenix, Arizona, this powerful band gives terrific energy and unbelievable strength that could make a dead man raise from the grave. The CD opens with a really impressive version of ‘Let The Good Times Roll’ and the band follows the same line along the other eleven songs included on the CD. Bright horns, flaming guitars, inspired keyboard arrangements, passionate vocals. The instrumental hurricane will make your body temperature go up and up while you are listening to this fantastic nine-musician band who give off all their energy to produce a very professional rhythm and blues; honestly and tastefully performed. Cold Shott & The Hurricane Horns will not disappoint any jump blues or soul lover and I dare say their ‘live’ shows will let you more exhausted than three days without eating anything!” — Vicente Zumel, “La Hora del Blues”, BARCELONA, SPAIN

“This band of older and experienced musicians is a cooking R&B unit which prefers party music with almost everyday gigs in U.S. clubs and larger venues. Nobody stands still when this band takes the stage! Their repertoire is mainly other people’s stuff covering wide stylistic territory from soul of Sam Cooke (A Change Is Gonna Come), R&B (Caldonia, Don’t Fight It, Let The Good Times Roll), Funk (Headin’ Down The Beeline) and blues (Why I Sing The Blues, Sweet Home Chicago and Tore Down). These songs sound very polished and are performed with verve and passion by the band of people who obviously enjoy their work…. so do we! Cold Shott & The Hurricane Horns means ‘great blues party’!” 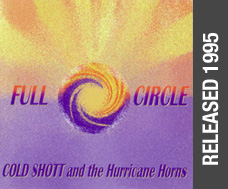 Well, there’s a party going on here. Those of us fortunate enough to live in Arizona know that Cold Shott and the Hurricane Horns featuring Small Paul have been a major force on the Phoenix blues scene for the last 12 years. Although the worst was feared when founder, bassist and manager Ted Kowal passed away in July 2002, the band seemingly grew stronger, carrying on his dream. Now we have this powerful live album, If You Got The Blues, recorded at the Rhythm Room this past October. Those many fans who have seen Cold Shott at their finest, as this writer did at the gala New Years Eve party at the Rhythm Room this past year end, will now be able to enjoy those moments time and time again with this long awaited release. Just as so many of their live shows begin with Tim Finn handling the vocals on “Let The Good Times Roll,” so does this CD. After much deserved applause, Small Paul (Hamilton) is introduced and he just wails on the Louis Jordan classic “Caldonia,” a song that is fast becoming one of his most requested songs in their live show. This is followed by a Kowal original, “Heading Down the Beeline” (the Beeline Highway, for those non-Arizona residents). A rousing version of Freddy King’s “Tore Down” gets us up on the dance floor, and before we can leave, we are slow dancing to Paul’s incredible version of Sam Cooke’s “A Change Is Gonna Come.” Two more Kowal originals, “Sittin’ On The Back Porch” and “If You Got The Blues Girl,” brought back memories of prior years. We do miss you, Ted. A Small Paul tune, “Ready Like Freddy,” leads us into two of their show stoppers, the familiar “Sweet Home Chicago” and B.B. King’s “Why I Sing The Blues,” both given a rousing Cold Shott and The Hurricane Horns treatment. The horn section of Dave Axton on trumpet and flugelhorn and Dave Russell on tenor sax, flute and piccolo, with special guest Jerry Donato on baritone sax, drive these songs to a higher level, something we have come to expect from all great horn-driven bands. The CD ends on a upbeat note, with Small Paul giving us his unforgettable version of the Wilson Pickett classic “Don’t Fight It.” Thanks once again to Paul, Rich and Jeff Brydle, Tim Finn, Tony Flores, Scott Engle, Jay Busch and the aforementioned Hurricane Horns for keeping Ted’s dream alive. Contact them by e-mail at coldshott@usa.net to get on their mailing list of upcoming shows.