SOULutions Liner Notes from Cold Shott and the Hurricane Horns 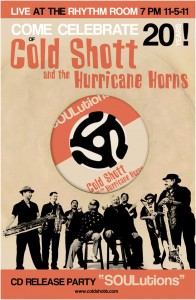 In 2011, our 20th Anniversary Year, we celebrate our longevity and want to express our appreciation for our steadfast league of supporters. This CD was essentially recorded “Live in the Studio” to capture and share the power and fun of our live shows.

The band started out as a small Blues Trio in early 1990, and through the vision of founder Ted “Madman” Kowal, our lineup soon included an always-energetic horn section. Since the late 1990’s our repertoire has evolved to present the music styles foremost in our hearts: Soul, R&B, Funk…. as well as the Blues. Under the musical direction of Tony Flores since 2002, along with strong vocals, blazing horns and a rock-solid rhythm section, you have Cold Shott and The Hurricane Horns – Still groovin’ and going strong into 2012 and beyond.
Sharing a few of our musical inspirations, we give you a a taste of the soulful and heartfelt performances of Willie Mitchell, James Brown, Little Milton, Howard Tate, Eddie Floyd, Tyrone Davis and Joe Cocker. We round out our selection with the funky soul of Tower of Power.

We dedicate this recording and the 20 year Anniversary to… 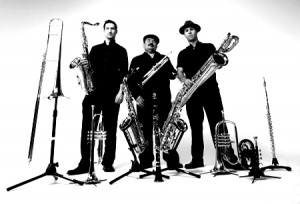 COLD SHOTT and THE HURRICANE HORNS started in Phoenix, AZ in 1990, as the 3-piece “COLD SHOT BLUES BAND” and is celebrating its 20 Year Anniversary in 2011.The band evolved, under the leadership of founder Ted Kowal (bass, manager) to become a powerful mainstay in the Arizona R&B, Blues, Funk and Soul music circuits. Adding a horn section and a formal name change to the band in 1991, COLD SHOTT and THE HURRICANE HORNS performs regularly at local clubs, community and municipal festivals, as well as music showcases and concerts.

The band features many veteran Arizona musicians most of whom have performed professionally since the 1960’s, not only in Arizona but all across the United States! Winning the 1999 Phoenix Blues Society Annual Blues Showdown sent the band to Memphis, TN to represent Arizona in the International Blues Challenge. The band was also chosen as the Year 2000 “Best Blues Band” as awarded by The Arizona Republic. They have opened up for or backed notable artists such as Delbert McClinton, Jerry Lawson, Guitar Shorty, Chico Chisum and Little Milton. 2010 saw them open for both Eddie Money and The Robert Cray Band and as an opening act for Curtis Salgado and The Tommy Castro Band in 2011!

This 8-piece group boasts a rocking rhythm section, powerful vocals and a 3-piece horn section…….the band is sure to make you get up and dance!

COLD SHOTT and THE HURRICANE HORNS performs Classic and Contemporary R&B, Soul, Blues, Rock, Funk and Jazz living up to its motto:

Gimmick-free pro performance with ‘Old School’ authenticity!
20 years !!!    How did we do it ??  Tenacity, baby.  Tenacity.

“You don’t get to somewhere,  from where you started, unless you have something to prove to somebody who is not listening to you.” *
* from  “Runnin’ Down A Dream”  –  Tom Petty DVD